Posted on March 26, 2017 by englishcountryhouses 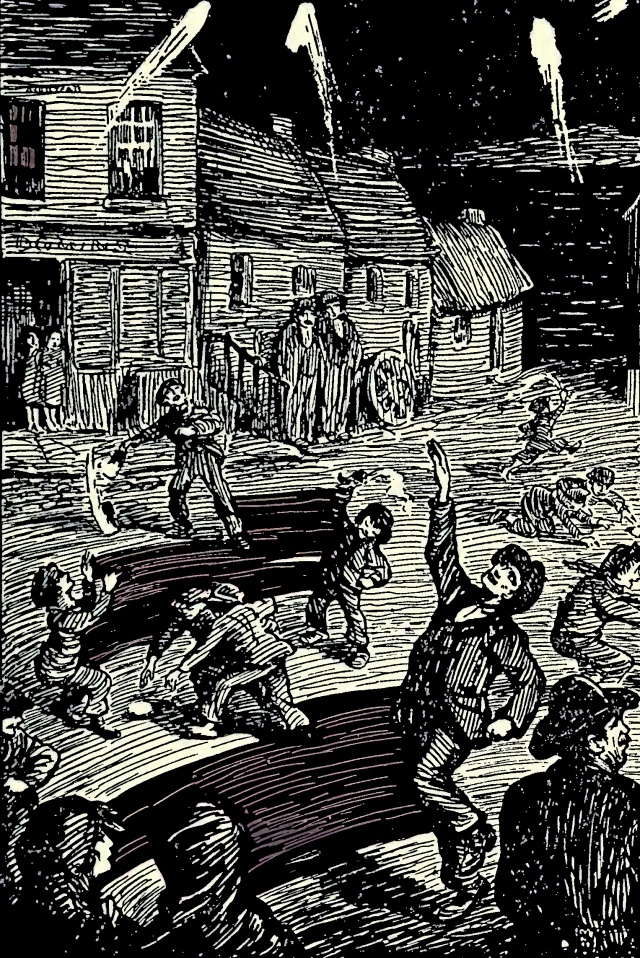 It is late. The square is full of flaring fire and people.

In the falling midsummer light of a St John’s Eve crowds laugh and gasp at the antics of the boys as they hurl flaming paraffin-soaked sods of turf high into the sky, catching them and throwing them up over and again, leaping over bonfires, colliding with each other, swinging lengths of burning hay-rope around their heads. A child, caught in an ecstasy of pleasure and dread, reaches out unthinking to clutch the hand of a tall man, who just as unthinking returns its grip. This unlikely couple, who have never met before and will never meet again, stand close together, holding hands, until the fire play is done. Then the little girl vanishes back into the crowd and the half-light.

On any day, Carter Square in Belmullet is a mass of moving metal. Cars and 4x4s, camper vans and delivery trucks converge on a tiny traffic island topped with a piece of contemporary public sculpture, a tall stone pillar of uncertain meaning. The bright-lit windows of Shevlin’s ‘Complete House Finish’ – to be a simple hardware store is no longer enough, even in Mayo – gaze blindly across at the supermarket in the grandly named Royal Shopping Mall, at the young mothers drinking Fanta and Coke in Fun Bobby’s Bistro. Cars career onto the pavement outside the Bank of Ireland, barely coming to a halt on the double yellow lines before their elderly drivers spring, with surprising agility, at the ATM.

A hundred years ago, there was no pillar in Carter Square. No roundabout. On the monthly fair days, Belmullet’s broad market square was filled with stalls and hawkers and livestock and people bargaining for tinker’s goods and young pigs and second-hand clothing. The rest of the time, the only movement in a little town with less than 700 inhabitants came from an occasional cart or gig passing through, or from the bowler-hatted men in collarless shirts who stood and passed the time of day and cursed their terriers and their barefoot children for chasing the chickens that pecked in the mud.

The intrusions of a modern world were less frequent, but no less unpredictable: the sound of a gramophone coming from an open door, competing with a fiddler or a crooned lullaby floating through a window next door; the occasional foreign face attracting a parade of curious followers.

On 16 June 1905, the writer John Millington Synge and the artist Jack B. Yeats arrived in Carter’s Square to stay for the week at Deehan’s Royal Hotel, a solid three-storey establishment presided over by seventy-four-year-old Mary Deehan. The two men were collaborating on a series of articles for the Manchester Guardian on poverty in the west of Ireland. They had set off from Dublin on 3 June 1905, first taking the train down to Galway and then going up into Erris. Synge was delighted to be offered £25 4s. 0d. for twelve 1400-word articles, ‘more than I’ve ever had yet’. Then Jack Yeats let slip that he was being paid even more for illustrating them. ‘Though I had much the heavier job the dirty skunks paid him more than they paid me, and that’s a thorn in my dignity’, he told a friend weeks after returning from the trip.

In Erris, Synge and Jack found poverty without nobility and a rain-soaked landscape. The ‘endless wastes of brown mountain and bog’, the ‘miserable cottages’, the rain, the absence of granite and limestone which was such a feature of the Connemara coast, all conspired to give them ‘an almost intolerable feeling of dampness and discomfort’. Even the people in the fields, weeding their potatoes and cutting turf, seemed drab. ‘Their draggled, colourless clothes – so unlike the homespuns of Connemara – added indescribably to the feeling of wretchedness.’

And yet, and yet. They didn’t know it then, but in Erris, these two Dublin playboys had found a western world that would live on for ever.

3 Responses to The Western World 1