Don Alonso and the Devil’s Hook 3/4

Posted on September 24, 2016 by englishcountryhouses 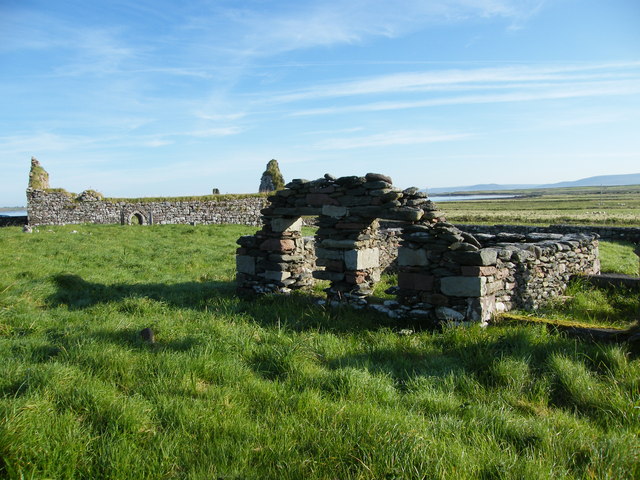 The ruined church at Doona

I crossed over the bay to Doona Castle one day in early April. I say ‘crossed’: but the little ferry that once carried travellers over the four hundred yards of water from Tullaghanbaun to the sand hills of Ballycroy no longer sails. Now, although at low tide I could almost lean across and grasp the stones of Doona Castle with my hand, I have to drive right around the bay, twenty-two miles, to stand beside them.

This particular spring day was hard and bright, with a wind blowing across from the east, sending stripes of white surf scudding down the bay. Two lambs bounded along the fence to keep pace with me, expectant, as the car bumped over the rutted track from the main road down to the shore. This was the old bridle path that led up through Ballycroy to the Tullaghanbaun ferry and on, to the Mullet. Now it leads nowhere except to the castle, to a neat two-storeyed house that stands beside it and to a roofless stone church by the shore that was old in Don Alonso’s time.

The remains of the castle, photographed in 1942

Close up, Doona Castle is more complete than it seems from across the bay. A fragment of tower, perhaps thirty feet high, looms over sections of wall which still stand intact. The castle survived into the early nineteenth century, and in the 1940s there was still a tradition that Spanish gold from the Rata was buried near the blocked up entrance.

Quiet now, in September 1588 this remote spot seethed with men and the sound of shouted commands. Bingham reported to London that ‘de Leva with 600 men fortifies in the Castle of Ballycrwohie [Ballycroy]’. An Irishman who served with the Armada claimed the Rata held 700, and the Spanish ambassador in Paris heard that Don Alonso had landed 2000 men in Ireland, ‘where the people are helping him’. All of these estimates of the landing party were exaggerated. When the Rata left La Coruña in mid-July it carried 93 sailors and 355 soldiers, many of whom were young Spanish nobles, keen to serve with someone as distinguished as Don Alonso. Given the attrition that one would expect through sickness and combat, there were perhaps fewer than 400 men to be taken off the ship at Doona.

That was still more than enough, far too many to be accommodated within the castle itself. Perhaps some of the Spaniards occupied the little church; others must have camped out in the surrounding fields and sand hills in makeshift tents. ‘I am no sailor’, Don Alonso had written in August, while still aboard the Rata and complaining bitterly about the conduct of the expedition; but he was a professional soldier who had raised an elite company in Naples and led it during the wars in the Netherlands; and he would have moved quickly to secure his perimeter, to set up advance sentry posts and send out parties to scavenge what they could in the bleak blanket bog of Ballycroy.

But then what? The Rata remained stuck fast on the Tullaghan bar. Don Alonso and his men were a thousand miles from home, in hostile territory, with no means of escape. To make matters worse, a storm hit the west coast of Mayo on 21 September, ‘a most extreme and cruel storm the like whereof hath not been heard a long time’, said Bingham. It smashed what was left of the Rata beyond hope of repair and wrecked several of the Armada ships that were still out at sea.

What happened next to Don Alonso and his men is pieced together from fragments of letters. It looks as though soon after the Portuguese deserters landed in Ballycroy they were found and robbed by members of the Burke clan, who learned where they came from. On 18 September, before the great gale and only a couple of days after the Rata grounded, Bingham received word ‘that the Devil’s Hook a notable malefactor of the Burkes in Mayo, hath of late taken a dozen skiffs or small boats with certain kernes [foot-soldiers] into the islands there, by which should seem that they have knowledge of some foreign enemy to land thereabouts’. So Bingham sent out a patrol of fifty men led by Gerald Comerford, a one-armed Kilkenny lawyer who had had his body ‘most cruelly mangled, maimed and wounded’ during the Second Desmond Rebellion of 1579-83, and who was a loyal servant of the English crown in Ireland. Comerford arrived in Tullaghan Bay after the great gale to find the Devil’s Hook and his men already there, swarming over the Rata and stripping it of everything of value. He hailed them, but they ignored him, and he was reluctant to come too close. He assumed they were plundering the ship for their own benefit, and that may have been the case, but the Burkes and their friends were also intent on rescuing Don Alonso’s men. They brought news to the Spaniards that another Armada ship, the Duquesa Santa Ana, was seaworthy and anchored in Elly Bay on the Mullet, only ten miles away.

Over the next twenty-four hours and helped by the Devil’s Hook and his men, the Spaniards evacuated their camp at Ballycroy, set fire to the Rata and either force-marched their way onto the Mullet or were ferried round the coast in a small fleet of skiffs. Or perhaps the Duquesa Santa Ana weighed anchor and came to pick them up, or met them halfway. We don’t know. What we do know is that on the Mullet Justin MacDonnell sent guides to help the Spaniards and gathered his people to resist any English attempts to take them.

It seemed that thanks to Erris, Don Alonso would see Spain again after all.