Posted on September 10, 2016 by englishcountryhouses 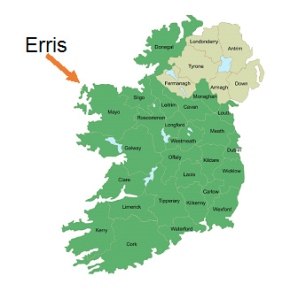 ‘The history of Erris is a blank until the close of the sixteenth century,’ declared the Edwardian historian Hubert Knox in his 1908 History of the County of Mayo, the first scholarly account of this hinterland.

That’s not quite true. There are a dozen ruined fortresses perched on the northern cliffs of Erris which date back to well before the reign of Elizabeth I: Dunnamo with its chevaux de frise, hard stones set into the ground before its walls to defend against cavalry who have been dead for a thousand years; Dun Fiachra, once a stronghold against the Vikings and now just a tumble of rocks.

And there are stories which mix myth and history. In 1811 a storm uncovered a pile of human bones among the sand dunes on the western shores of Erris, evidence of an old folk tradition which said that a king of Munster led a raid on the people of Erris and was defeated at a great battle on the sands. The storm also exposed a mound which contained a solitary skeleton, thought to be that of the king, sitting or standing upright and facing the scene of his defeat.

Soon after the English began to enforce direct rule in the west of Ireland in the 1560s, the borders of Mayo were formalized and the county was divided into nine administrative districts, or baronies. Erris was one of these although, somehow to emphasize its unimportance, it was called a half-barony.

Its borders have hardly changed since. Then, as now, it covered some 330 square miles, most of it blanket bog and inhospitable mountainous terrain, with a sparse population concentrated along a coast which is heavily indented with bays and little estuaries, interruptions among the salt-marshes and high cliffs. At the western edge is the Mullet, a north-south isthmus about twenty miles long, connected to the rest of Erris by a narrow strip of land hardly more than fifty yards across, with Broadhaven Bay to the north of the strip and Blacksod Bay to the south. 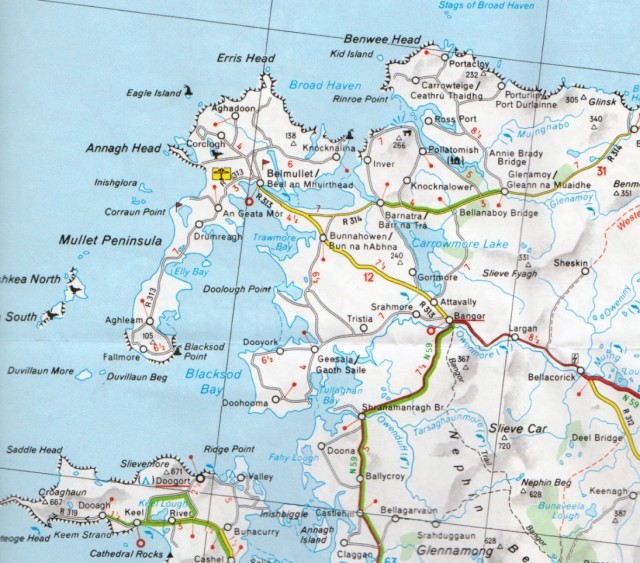 That narrow strip divides Erris in two, geographically, topographically, emotionally: everything on the isthmus is ‘within the Mullet’ and everything to the east of it is simply ‘the mountains’. The land within the Mullet is so isolated that one Victorian reformer suggested the government should ‘form there a Penal and Reformatory Settlement, for which it is admirably adapted’. Beyond it are the landless waters of the west, said to conceal a magic place where the seal-men live.

If no one could speak with certainty about Erris’s past, no one loved it, either. In 1710 Edmond Halley called it ‘useless and unknown, wild, and devoid of business or of towns’. The Georgian cleric Richard Pococke rode through it in 1752 and thought it ‘the most dismal looking country I ever saw’. James McParlan, a physician who produced a statistical survey of County Mayo in 1801, found it so different, so cut off from the rest of Mayo, that he felt he must treat it as a separate county. In the 19th century it was called the ‘land of no promise’.

No Canaan here. No milk and honey. Two hundred years ago there were no towns, no hotels, no houses of public accommodation at all. In fact there were only two four-wheeled carriages in the whole of Erris. Then again, there were hardly any roads. Only one was passable in winter, the route up from Newport in the south of Mayo to the Mullet, and that was ‘as rough and devious as those of the Alps’.

Erris hadn’t changed much by the 1930s, when the Irish naturalist Robert Lloyd Praeger wrote his classic account of the landscapes of Ireland, The Way That I Went. Picking his way across the endless brown bog, scrambling down remote cliffs and up the scree of empty mountains, Praeger found Erris to be ‘the wildest loneliest stretch of country to be found in all Ireland’, frightening in its isolation, yet at the same time inspiriting.

In Erris, he said, ‘you will need to be a very worldly worldling if you fail to catch some inarticulate vision of the strange equation in which you stand on the one side and the universe on the other.’

Praeger understood. He understood that Erris is a place where the distance between heaven and earth narrows so much that you can see through to the other side. 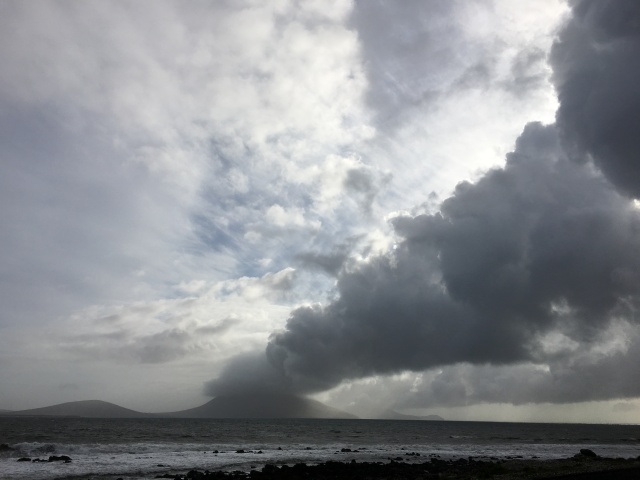 2 Responses to A strange equation