Posted on August 21, 2018 by englishcountryhouses

The mist cleared. And for a moment, I thought I saw it – the enchanted island of Manister Ladhra. Far out in the Atlantic, it hovered high and green and swathed in cloud, while the gulls danced on the wind and the gannets dived below me. Then it was gone.

Phantom islands have been coming and going off the west coast of Ireland for a thousand years. The most famous is Hy Brasil, which was shown on Catalan and Venetian maps in the 14th century and still appeared on navigational charts as late as the 1860s. Hy Brasil (no relation to the South American country) was a terrestrial paradise, with a harbour, houses and a castle at its heart. It appeared every seven years and for the rest of the time it lay shrouded in cloud, kept hidden by the hand of God, or by a powerful sorcerer, or by evil spirits, depending on which version of the story one believes. 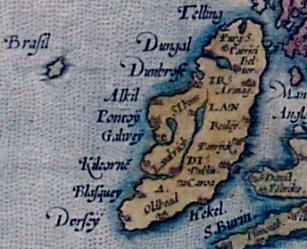 Ortelius’s 1572 map of Ireland. The island of Hy Brasil is at top left.

There were many other such phantoms. Beyond Donegal there was an island called Tir Hudi, which contained all the riches of the world until it was enchanted by druids. North Mayo fishermen used to talk about Imaire Buidhe, an island where they might sometimes hear the sound of livestock and see the leaves of apple and oak before ‘the fog rose, and nothing was seen but the foam curling on the billow and the tossing of the porpoise.’ Also off the North Mayo coast, just beyond the Stags of Broadhaven, lay the Sunken Land, a country of hills and valleys with cattle in green pastures and sheep browsing on the slopes. Like Hy Brasil, it appeared every seven years when the Seal People, to whom it belonged, took human form.

Manister Ladhra (or Monaster Ladiri, or Monaster Lettera) belongs to this group of mythic islands. It was said to lie about a mile off Annagh, a wild and windswept headland on the Erris coast. Anyone lucky enough to glimpse it would be able to make out a delightful green land, with woods and valleys, rivers and little bays. Some claimed it was covered with church buildings, with a belfry and a tower. Others said it was ruled by a great king and crowned with a fortress garrisoned by giants who were ‘armed at all points with their caparisoned horses, standing in stables fast asleep, but waiting to be awoke by the sound of a great bell.’

What Manister Ladhra had in common with all the other mythic islands along the west coast was that it was always out of reach. Like them, it embodied a ‘longing for a land where there should be no sorrow, or age, death, or decay,’ as one 19th-century historian put it. It symbolised a ‘pathetic desire to escape the sadness of life.’

For a moment, I thought I saw it.

2 Responses to The Enchanted Island